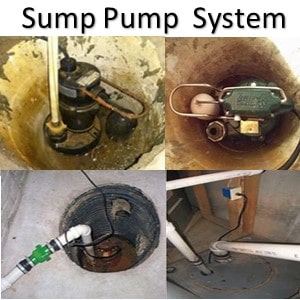 A sump pump system is system that includes a pump that sits in a sump (basin, pit, bucket) to move water from what flows into the sump through discharge piping to a destination away from the home to protect the home’s foundation. Water build up around the foundation causes pressure build up and can cause foundation cracks; therefore a tile drainage system is installed around the house perimeter to allow water seepage to enter the drainage tile and flow into the sump basin.

What Are The Key Sump Pump System Features?

A backup pump is necessary in case the electricity fails, but that type of pump is only a temporary backup pump.

Like any other product, materials make a difference when it comes to sump pump durability and functionality.

The most durable material is bronze but because of its expense other options are used. Cast iron is a great second choice because it is both durable, dissipates heat and adds weight for stability in the pit. Other material used include stainless steel, cast steel, aluminum, zinc and thermoplastic. Thermoplastic is the weakest, crack and warps easily and is thus the least durable. Because cast iron rusts over time, all pump manufacturers epoxy coat it to impede corrosion.

Pump housing can be made from any of the above listed metals and plastics however a cast iron pump is second best to bronze.

Material used for Internal parts are also important. An impeller made of cast iron or bronze is more durable than engineered plastic. The shaft must be made of metal not plastic. Attachments, screws and handles made of stainless steel are ideal because they will not rust.

Motor power is measured by horse power. The most common horse power ranges from one-fourth to one for a residential sump pump. The higher the horse power the more water it can move within a period of time.

Most manufacturers buy third party motors known as canned motors not with an outer wall of cast iron which can be dropped into the pump housing. Zoeller pumps are unique in that the motor shell is made of cast iron so with their cast iron housing it has two layers of cast iron for better heat dissipation during continuous heavy pumping.

Floats are used to move up and down in the water as the rise rises and recedes. Thus a solid polypropylene float is the best because it is very buoyant and is puncture proof.

There are many types of float switches used. However, the more reliable ones are those which use the two pole vertical float rod and an electronic switch. Find more details in the ”How do Float Switches Work” section below.

All power cords can be submersed in water. However there are various features manufactures use to deal with various situations. Liberty Pump makes their electric power cord easily removable for replacement even though power cords rarely malfunction. Zoeller has two recent models with a LED plug that lights up when electricity is present (working). Flotec uses piggyback plugs which are two cords – one for the float and the other for the motor as a fall back; in case the float fails the pump cord can be plugged into electricity and run manually without a float.

The length of a power cord is also a key feature. The most common length is nine feet. Fifteen feet is the longest length not requiring customization.

Different approaches are taken for solids handling. Some sump basins have no debris therefore pit solids and debris are not an issue. Therefore sump pump manufacturers use a top suction approach such as Wayne. Others use a bottom screen approach to protect solids and debris from getting into the pump and clogging and breaking parts such as Glentronics (Basement Watchdog) and some Superior Pump and Little Giant Pumps. Still others use a vortex impeller approach which handles small spherical solids by passing them through the pump without clogging and damage to the pump such as Zoeller, Liberty Pump and Red Lion use a vortex impeller.

A permanent sump pump system includes stationery discharge piping usually made of PVC that is pressure rated (schedule 40). Some home owners choose to use flexible discharge piping but this is not idea because it deteriorates over time and requires props to hold it in place.

The most common diameter size is one and a half inches. This is also the most common size for a sump pump outlet port. If smaller diameter discharge piping is used, sizing connectors can be installed though the rate of water flow is impeded.

How Does A Sump Pump System Work?

The way a sump pump system works is very simple. Rainstorms come, the soil around the house becomes water saturated. When a drain title system is in place, the water seeps into the drain tile which is connected to the sump pump basin. As the basin fills it will overflow unless there is something to let the motor know the pit will overflow unless the water is removed.

The float switch mechanism is designed to respond to water height and pressure. When the water height reaches the float ON setting or the pressure build up exceeds that of the pressure measuring device, it causes the switch to complete the electric current circuit. The pump motor then turns on and the water is pumped from the basin. When the water recedes, the float lowers and the water pressure decrease at which time the switch opens the electrical circuit and the motor turns off because it has no electrical power.

The Float Switch And How It Works

Float switch design and how they work varies by pump manufacturer. The various designs include: 1) The Tether 2) The Vertical 3) The Diaphragm 4) The Electronic. 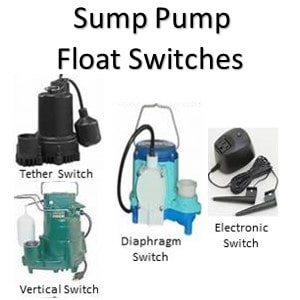 The vertical float switch design is most common and used by all sump pump manufactures. The difference between manufactures is the way the float is secured and the way the type of switch used. Brands like Flotec and some Little Giant and Superior Pumps use the single pole attachment to the top head. Others like Zoeller, Wayne and Liberty use a two pole attachment top and bottom approach which is more reliable. Glentronics (Basement Watchdog) uses the cage approach to house their float switches.

Electronic switches are becoming more popular because they have no moving parts like the mechanical float switch. There are various techniques used; however we have found the most reliable to be the Hydrocheck HC6000 (versioned). We installed ours in 2011 and it has not failed us once. It is an amazing switch and gives us so much peace mind because a float switch is the first thing that fails for a sump pump.

What Is The Role Of Pumping Performance? 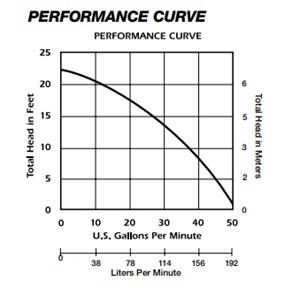 What Makes The Best Sump Pump System? Our Conclusion

The best sump pump system keeps up with the water flowing into the sump and removes it from the sump to prevent basement or lower level flooding.

Too strong of a motor empties the sump basin too fast and causes motor short cycle which leads to early motor burn out.

Not enough motor horse power causes sump basin over flow which leads to water in the basement.

So it is important to install the right sized sump pump. It is easy to determine the size needed by doing a couple of quick measurements. For peace of mind we suggest you measure the amount of water coming into your sump pit and going out in the span of one minute the next time a heavy rainstorm occurs. Use your calculation to find the sump pump that provides the pump performance needed for the volume of water entering the pit and for the height at which the water must be pumped up and away from the house.

Materials used for the sump pump make a difference. A cast iron sump pump with a vertical two-pole electro mechanical sump pump is most reliable, but other sump pumps do the job and have parts available to replace the float switch. A vortex impeller provides a maintenance free option is small pebbles are present in the sump basin. A discharge piping system made of PVC is most reliable.

Using the above information and guidelines will help you to own the best sump pump system for your water pumping needs.

YES, NEXT I WANT TO?

Shop the pumps below. Select your choice.